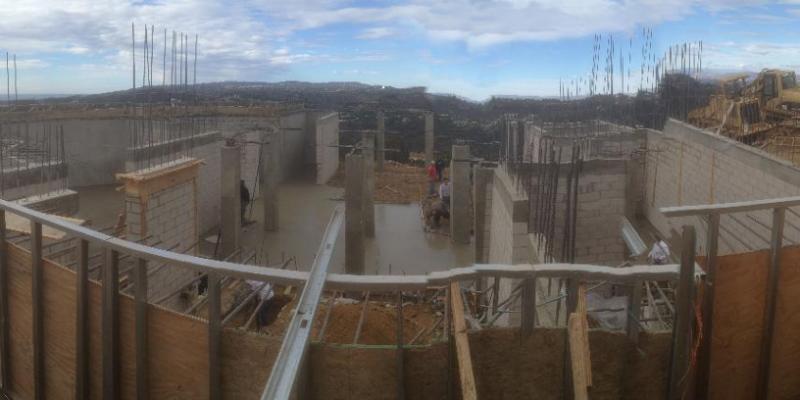 Houzz contributor Jen Dalley said it best when she wrote, “No house should ever be on any hill … It should be of the hill, belonging to it, so hill and house could live together each the happier for the other.”

Ilio Mavlyanov from Jasper Venture Group embodied this thought when they took on a very specific and very sloped development in the hills of Beverly Hills, such construction is called hillside construction.  This brand-new contemporary compound of breathtaking beauty is located on one of the highest points in Beverly Hills Post Office (90210).

When you look at the effortless structure with its wraparound 270-degree views of Century City, the San Fernando Valley, and the Pacific Ocean, it’s hard to believe it was just another patch of wild hillside, one among many in the hills of BHPO. Ilio Mavlyanov took this sloping hillside and used structure to make it possible to build such a dynamic piece of real estate on it.

What was once a bare hill now stands a 15,000-square-foot home. Yet, how did that bare hill become the foundation for such a massively unique and inspired piece of real estate?

A house of this magnitude required a big team of architects and engineers, not limited to civil engineers, geotechnical, geological, and structural engineers.

Several steps were successfully taken to prepare for the building of the Beverly Hills home.  All in all, the construction team basically made a 3,750 cubic yards of soil cut into the land of the hillside, had to fill 1,550 cubic yards, and exported 2,200 cubic feet of soil.

If one cubic yard of dry dirt is approximately 2,000 lbs. or one ton (and that weight goes up significantly when your soil is wet) and there are three feet in a yard, then that is about 733 cubic yards of dirt removed. That equals a total of 1,466,000 lbs. of soil removed from the site just to get started with the foundation of the new build. That was approximately 180 full truckloads of wet dirt hauled off the property, and that was only the first phase of construction.

The initial step to complete the foundation was to build 78 caissons and friction piles connecting the concrete slab. Caissons are known to be adaptable to various site conditions but require teams with the experience to install. It’s constructed by drilling deep shafts into the ground to reach the bedrock and then adding reinforced steel. This type of work creates a structurally sound foundation, preventing soil slides and the house from sinking. It also provides reinforced strength to make the house more earthquake-resistant. Grade beams were used to connect and transmit the load from bearing walls into piles and caissons and served as connections between footings. Such grade beams are used in projects where the bearing capacity of the soil is lower. 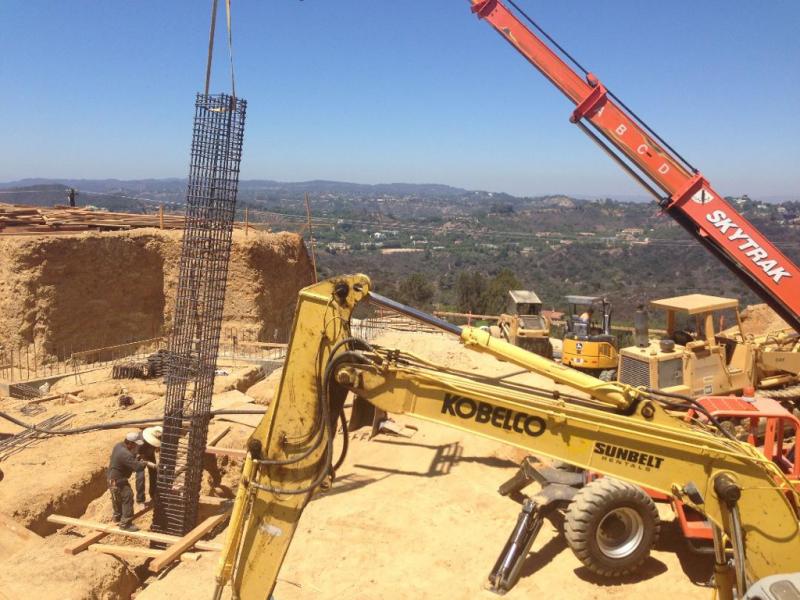 Next, Ilio Mavlyanov’s company hired an architectural firm called VEA Architects, who had worked with him on another property in Encino that also required some clever architectural thought to overcome its hillside challenges. VEA designed a retaining wall that climbs 20 ft. high in some moments.

The wall was created from reinforced concrete. To ensure that the mammoth compound would be structurally sound without fail, VEA decided to reinforce the wall foundation with an additional 19 piles. Not even the great twister from the Hollywood classic film The Wizard of Oz could uproot the structural foundation holding this Beverly Hills property firm in the ground. The wall spans more than half of the property and a portion of the wall was used as the exterior wall of the swimming pool.

The wall also required the need to create an infrastructure around the house that included importing 800 linear feet of sewer, and 700 linear feet of gas lines to the area. Building sewer lines required a lot more workforce, and for that work, Bali Construction was hired, a union-based company that specializes in civil construction. The sewer work fell under the public works requirements and benefited the entire area as now the neighbors would be able to connect to it.

A massive deck was built for the house alongside a large, elevated swimming pool built into the deck. The exterior walls of the pool became part of the retaining wall.

As a result of hard work, a 15,000-square-foot, seven-bedroom, 13-bathroom single-family home with a twelve-car garage and a big entertainment component in the basement, including a spa area, golf simulator, and movie theater, was built.

Ilio Mavlyanov, alongside his architecture and construction teammates, did exactly what Jen Dalley said, “…It should be of the hill, belonging to it, so hill and house could live together each the happier for the other.” The BHPO compound does just that. It belongs to the hill.